Grab your Guild members and start mapping out your strategy, League of Angels III’s upcoming Update 3.0.0 has a feature-rich guild expansion to get all our fans buzzing at the very start of the one-month summer carnival! Introducing Guild War, a brand new single-server GvG game mode where players must fight as a Guild in the fiercest competition League of Angles III has ever seen. A new guild building and feature which enables guild members to help each other will also be unveiled in addition to the exciting new mode for GvG fans. Can you and your comrades become champions every week? Read on to find out more about Guild War. 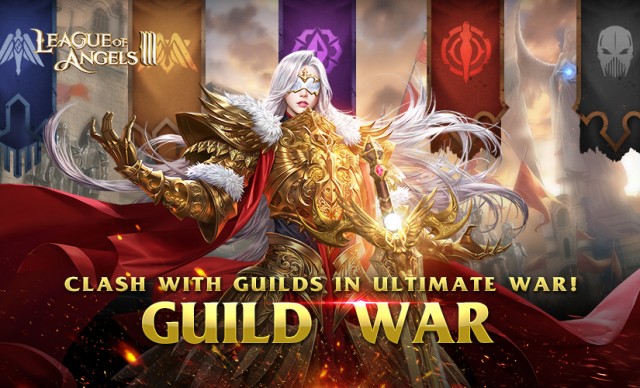 Guild War is accessible from the Guild War icon in the game interface. It is available to players that are level 50 and above and for guilds with more than 10 members. Take on tougher and tougher opponents as your Guild destroys other Guild buildings one by one and collects points. Focus on the attack rather than the defense. The road to the top will not be easy, but this is how champions are forged.

>Get Ready for the Weekly Grand Battle

Better know the schedule before you take any action. Guild War starts at midnight every Tuesday and the Champion is revealed at 10 P.M. every Sunday. Players will fight fierce battles against their rivals every day in the seven-day  sessions. One round is completed every day from Tuesday to Saturday during which you can check your opponents and their status at 12 A.M. and start attacking your target at 12 P.M. Mondays are off-season when you can take a break and get ready for the next session. Be sure you join in when it starts!

The system will match opponents according to their victory records and Guilds rank, excluding Angel Academy. A formation is set for the defender at the same time as guild members are placed to guard different buildings based on their battle rating, and spare members are added to the strongholds at the front. When a Guild War starts, guilds that disband will be eliminated from the current Guild War, and newly created guilds will only be able to participate in the next rounds of battle in the current session. If a Guild becomes disqualified after the Guild War starts, it’ll still be able to join the current session while having to be checked for the next session of Guild War.

Three FREE attempts are granted every day for each individual, and additional attempts can be purchased. Attempts will be reset at midnight every day. An attempt is consumed whether you win or lose a battle. The total attempts that you can attack every day will be 5 times the number of your guild members. Winning a battle will not only earn points for yourself, but also for your guild. Demolishing all the buildings of the rival Guild is considered a victory.

Guild War is a trial of wits and courage requiring guild members to fight strategically against rival guilds and win challenging battles to maximize the great rewards they can earn. Among the elite guilds, only the best Guild can make it to the Champion Hall!

Opponents face their attacker with full HP at the start of every battle, but they will receive a debuff (reducing their ATK, DEF and HP by 10%) which can be stacked, so the victory won’t be too tough.

To defeat the opponents and earn as many points as possible to be crowned the Champion, you can choose a buff for your guild and yourself. As the defender, level 2 guilds gain an extra buff that increases their ATK, DEF and HP by 5%, and level 3 guilds can stack one more buff, and so forth. As the attacker, the guild leader or the deputy leader can inspire to enter a chance for a buff to increase their ATK, DEF and HP randomly. Every player can use Gold, Diamond, Topaz, or Guild Contribution to get a chance to increase their buff. In addition, different guild buildings will have different buffs.

Not all of the guard info can be seen when attacking. Three of the ten strongholds will have one guard information invisible to the attacker, which makes it harder to demolish the buildings. Be careful!

Each victory over an opponent grants the attacker rewards, and all the members of the victorious guild will be rewarded a mystery chest every time they demolish a building of the opponent. All guilds who have participated will be able to claim their rewards after the Guild War ends. All members from the champion guild, the top 5 and top 20 guilds will be able to receive extra resources. The leader, the member who’s earned the most points and all the other members from the champion’s guild will receive a special 7-day title; the member who’s earned the most points will obtain a 7-day legendary mount “Hellhound” which is a symbol of bravery and the other members a slightly inferior mount Magma Hound (players can only possess it for 7 days as well). Plus, you’ll be able to open chests once you’ve earned the required points, and be credited with having defeated a certain number of opponents in all the Guild Wars.

All unclaimed rewards will be sent via in-game mail after the event ends.

No matter what your Battle Rating is, your Guild needs you to step up! Apart from Guild War, a Guild Skill Hall will be added where you’ll be able to significantly raise the attributes of your deployed heroes by contributing and leveling up your Guild building. You can also get assistance from your Guild members if you are in short of Stamina, challenging attempts in Trial and Realm, shards of heroes and equipment, all you need to do is just making a wish in your Guild! Make sure you’ve joined a Guild to reap the benefits. 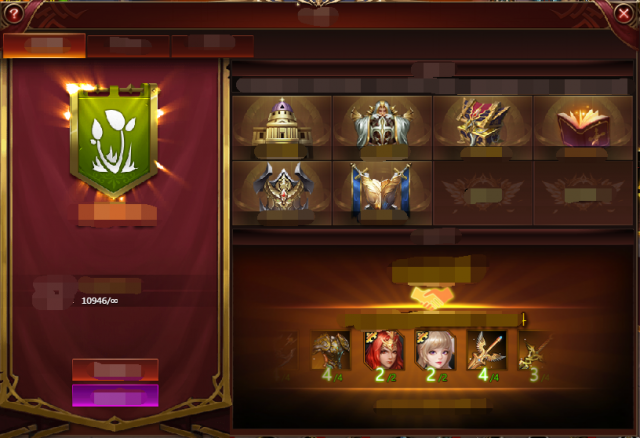 Summer sun, the Festival’s begun! The first Guild War starts on September 4th after the update. Remember to team up with your friends in the exciting GvG mode where tons of resources will be there for the taking! We hope all players will have a wonderful summertime in League of Angels III!